LAMARTY in the decors "Sonoma Oak ", "White " in the" Big alteration "project on the Russia-1 TV channel 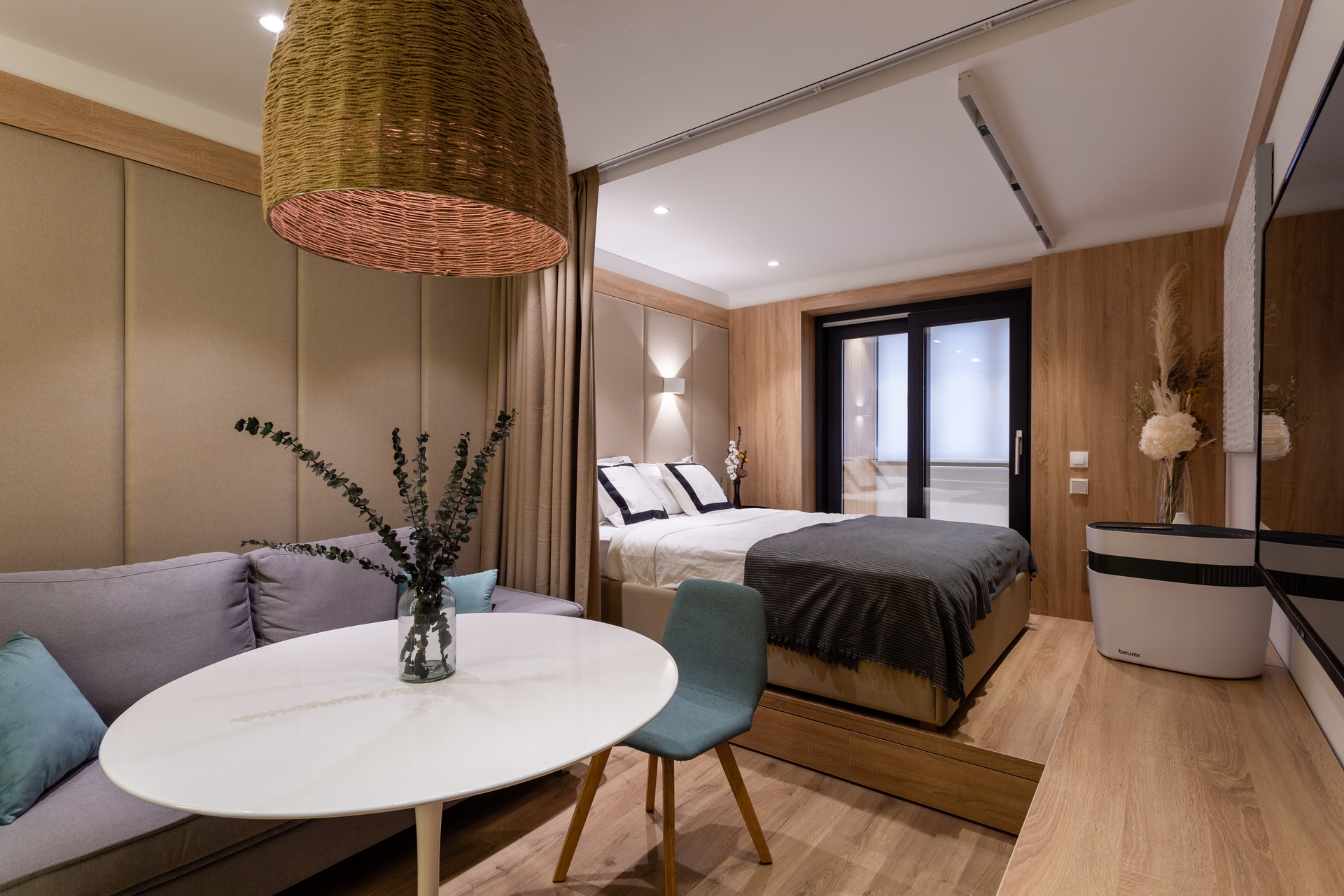 In the bedroom-living room of the heroes of the TV project, the usual zoning of the room has been preserved. But from the balcony they built another one - an economic one.

The balcony was separated from the room by a sliding partitionAnd the floor level in the bedroom area was raised using a podium.This is how additional storage space appeared.In the recreation area there is a large sofa, a round table and the dream of the heroine of the project - a wardrobe, which is, but which is practically invisible
Since the heroes use the same room as both a bedroom and a living room, designer Oksana Salberg-Vechnadze left the zones in their original places, but reorganized each of themIn the bedroom area, the bed was unfolded and made on the podium - so the division of the room into zones became even more tangible
The main problem of the heroes was the unwillingness to clutter up the already small space of the bedroom-living room with wardrobesThis is where the main idea of ​​our project was born - "wardrobes without wardrobes"The most important wardrobe was located in a room, which even the owner did not immediately notice in the updated interior.Storage places were also organized in the same podium (bed linen and towels), under the bed (seasonal storage) and on the loggia (for the needs of storage, cleaning and ironing)Conceptually, the interior was born from the idea of ​​a hotel room, which has what you need for a comfortable life, but everything is compact and ergonomically locatedAnd also from the aesthetics of Scandinavian minimalism: natural shades, materials, colors

Podium
The metal frame served as the main podiumDurable oriented strand board was used as a cladding.As for the functionality, the podium will not only zone the space, but will also serve as a storage system.

A new wardrobe made of Syktyvkar laminated chipboard in the same textured light decor with a pearl tint and a pretty white insert in the form of a full-fledged module with shelves for small itemsAnd despite the fact that it is practically invisible, there is plenty of space for storing the things of our heroes.

Loggia
Here, too, new storage systems appeared in the form of spacious cabinets in the same decor - Sonoma Oak A household block was organized in one of the cupboardsUpstairs in wardrobe trunks are stored things of rare useBelow in the pull-out section - everything you need for cleaningNearby - a humidifier and sports equipmentThere is also a place where a mini-pantry with homemade preparations can easily be accommodated.
In the closet opposite, there are other household items sorted into categories. 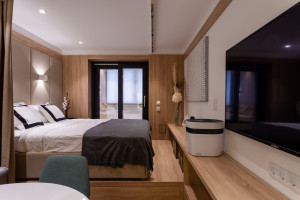 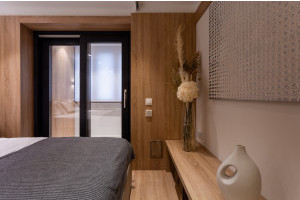 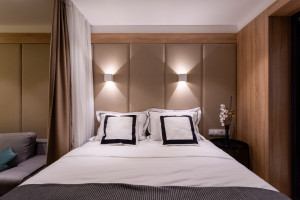 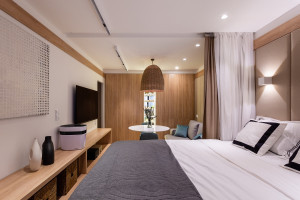 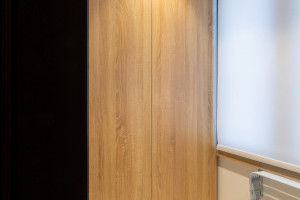 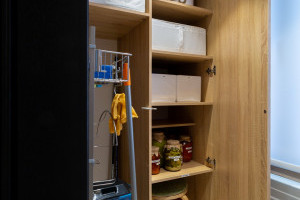 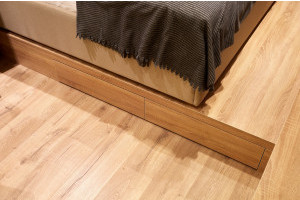 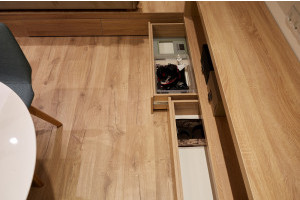 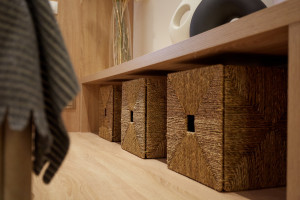 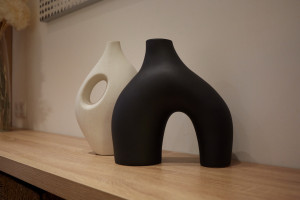 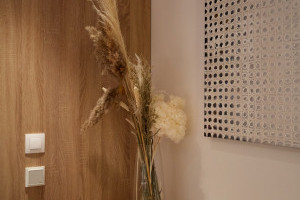 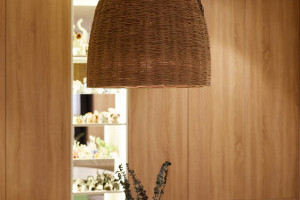 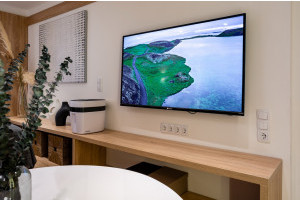 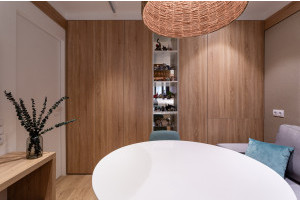 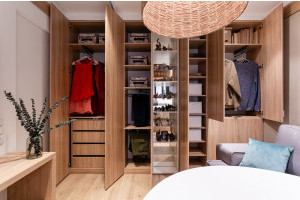 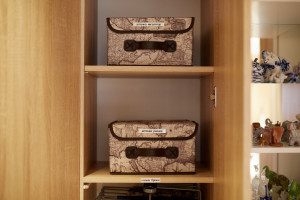 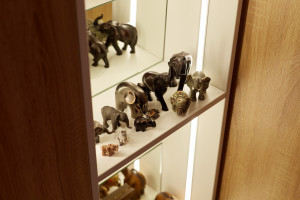 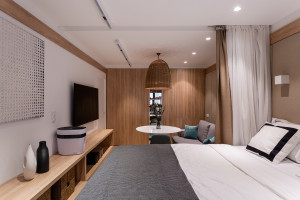 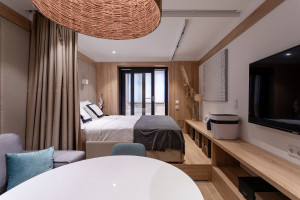 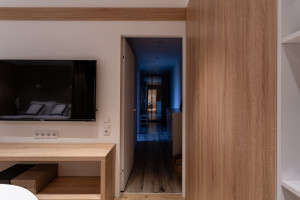